Performance is the key factor for any successful data integration project, knowing the type of transformation that you’re using is the first step on optimizing the SSIS flow performance, by utilizing the correct transformation or the design alternative technique you could gain much more performance out of your SSIS flow.

The recommendations and suggestions below represents real life experience and excerpts from the Microsoft Technet article : http://technet.microsoft.com/en-us/library/cc966529.aspx along with influence from the other links referred to at the bottom of this Article. While this Article presents a summary and major points to focus on from those resources, you are encouraged to follow the links for more specific and in depth discussion.

SSIS (SQL SERVER INTEGRATION SERVICES) is using a buffer-oriented architecture to efficiently load and manipulate datasets in memory, the benefits is avoiding the I/O to the disk and physically copying the data to the disk, and therefore it’s transferring the data from the source to the destination through the pipeline without touching the disk.

As this data flows through the pipeline, SSIS attempts to reuse data from prior buffers as much as possible when additional operations are performed. How buffers are used and reused depend on the type of transformations that you use in a pipeline.

These process the data in Row-by-row basis, Row transformations have the advantage of reusing existing buffers and do not require data to be copied to a new buffer to complete the transformation.

• Do not block data flow in the pipeline.
• Data is not copied around, only pointers.

Are often used to combine several datasets. They tend to have multiple data inputs. As a result, their output may have the same, greater, or fewer records than the total number of input records.

• Must see all data before passing on rows.
• Blocks the data flow – can be heavy on memory
• May also use “private buffers” to assist with transforming data.

1-You could monitor and observe the performance using the PROGRESS tab, while running the package, it’ll tell you when the task started, ended and how long it’s taking to finish, which would be a great way of discovering which tasks is pulling the performance down.

2-You could also use a free add-on for BIDS (Business Intelligence Development Studio) called BIDS HELPER, can be downloaded from http://bidshelper.codeplex.com/

It offers whole new features for the BIDS environment which would help you such as deploying your packages, dtsConfig file formatting and SSIS performance Visualization which I’ll cover now.

Using the SSIS performance Visualization is simple, you just right click on your package after installing the BIDS HELPER and you’ll have new options, you need to select “Execute and Visualize Performance”.

You’ll be introduced to another screen with Performance Tabs, and you choose to visualize the performance by looking at Gantt Bars, Statistics Grid or Statistics Trend, which compares the performance from one execution to another. It adds a new column for each execution and highlights whether the duration of that piece of the package was faster or slower than before.

But basically you need to monitor the 3 famous kinds of memory buffers:

As I always say, everything is life could be done in many different ways; it’s just YOU who needs to decide which approach is better for you as it really depends on your environment and business requirements.

I’m going to point some points that you’ll need to do more research and also included some links so you can look it up in more depth.


3-Maximize Parallelism. Utilizes the available resources as much as you can. More ...

4-Maximum insert commit size and Rows per batch has a great effect for not treating the whole incoming rows as one patch.

• Use SELECT statements as opposed to selecting the tables dropdown.
• Be Picky! Select only what columns you need VS SELECT *

7-Minimize blocking as much as you can:

• Sort your query in the engine, or even using the SQL command in OLE DB Source instead of using Sort transformation.
• Merge transform requires Sort but not Union All, so use Union All wherever you can. More ...

10- If the SQL server is local, consider using SQL Server destination instead of OLE DB Destination.

12-Use “Fast Load” when using OLEDB, it uses BULK INSERT and would be faster.

13-Optimize the packet size in your connection managers to 32K (32767) and that’s the fastest option.

More resources on the subject:

Use that for January (1)

Email ThisBlogThis!Share to TwitterShare to FacebookShare to Pinterest
Labels: SSRS

I'm using a derived column, and assuming that the column name is [Column].

That's assuming that your dates are in the year 2000 and above...


That's the only way since we have only 2 digits for the year, plus i'm calculating patient's age, so I don't think any of them over 100 years old !

I'm open to discussion if you have a better way of doing it..

I got a requirment to dump all the FTP file listing for all folders and subfolders to a text file.
I'm using here a free FTP server which you could use too
ftp://ftp.secureftp-test.com/            User:"test"    Password: "test")

what SSIS FTP Task can you do nativly? 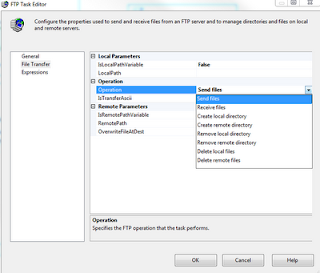 The FTP Task, supports, sending, receiving, deleting folders and directories, but doesn’t support watching for a specific files or getting a list of the FTP directory listing.

Get list of files and folders to a text file.

B. Select “Microsoft Visual Basic 2008” as the scripting language, then click “Edit Script” 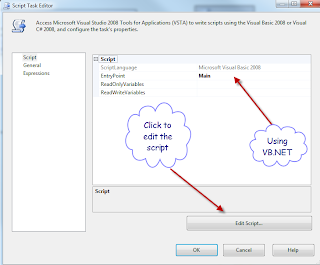 And the result will be at D:\FTPList.txt 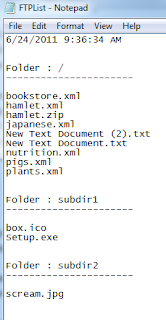 'delete if file exists, Comment out if you need to append to the existing TXT file
If File.Exists(FilePath) Then
File.Delete(FilePath)
End If

Dim SW As System.IO.StreamWriter  'Writer to write to the file
SW = System.IO.File.AppendText(FilePath)

If Not Files Is Nothing Then 'checking for no files
For Each FileName In Files
SW.WriteLine(FileName)
Next
End If
SW.WriteLine(vbCrLf)

Catch ex As Exception 'Catch errors, make up your own error as you can see.
Dts.Events.FireError(911, "", "Errrrrrrrrrrrrrrrrrror, something bad happened!!!", "", -1)
Dts.TaskResult = ScriptResults.Failure 'reprot failure

Pinal Dave has a huge list of qestions for the DBA interview questions.
http://blog.sqlauthority.com/2011/07/01/sql-server-interview-questions-and-answers-frequently-asked-questions-complete-downloadable-list-day-0-of-31/
Posted by Jason Y at 7/06/2011 09:05:00 AM No comments:

Email ThisBlogThis!Share to TwitterShare to FacebookShare to Pinterest
Labels: Other, T-SQL

Failure is not my option.. Control SSIS flow success or failure options..

How to control the success and failure of the package and execute it successfully?  Sometimes the requirement is to continue the execution even if an error has raised, might be a package that has nondependent tasks.

There are 3 ways to do that… 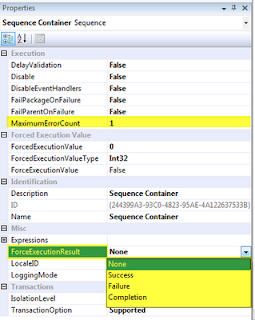 3- In tasks sequence, we can set ‘On Completion’ precedence constraint instead of ‘Success’. 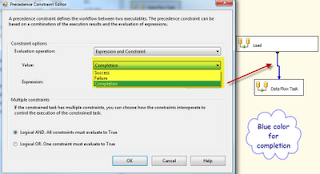