SQL Server 2012 is full rich of new features for SSIS, really many new useful stuff, such as the script task debug and the renovated Flat File Source, that could handle uneven number of columns...


Today I am going to demonstrate 4 new SSIS expression functions...


Which exactly the opposite of the RIGHT functions, and similar to the LEFT function in T-SQL, which allows you to grab a number of characters from your string, starting at point zero or in other words from the LEFT side of the string.
http://msdn.microsoft.com/en-us/library/hh231081.aspx


Which allows you to separate your string into tokens based on a specified delimiter, and returns back the numbers of occurrence of that expressions (Number of Tokens)
http://msdn.microsoft.com/en-us/library/hh213135.aspx


Substrings your string into Tokens based on a specified delimiter and brings back the number of requested token.
http://msdn.microsoft.com/en-us/library/hh213216.aspx

Let's use a demo as I learn better by examples... 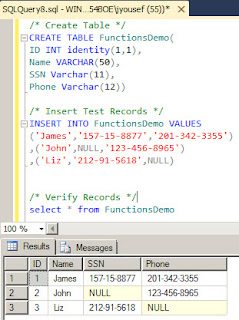 I'll basically add a "OLE DB Source" to get the records from the database, then a derived column to use these expressions goodies.


The package should look like that...I'll assume that you know how to use the source and will skip its configurations. 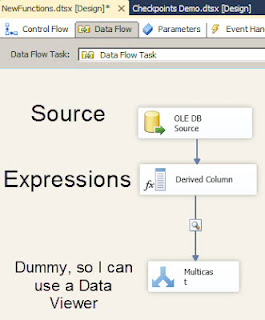 And here's my expressions at work, in the Derived Column Transformation. 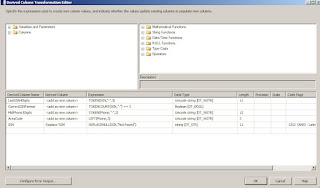 Which I’m using the above various expression, to get the last 4 digits of the SSN, to validate if the phone number in the right format, replace a null SSN or to get the area code from the phone number, which is simple and basic but will give you the idea of how you could use these new functions.
And here's the results